During one of Professor Wisenheirmer classes, he lectured on the expansion of the Universe. In attendance was a mix of students that adhere to creationism, evolution and the undecided. Professor Wisestien and a few research assistants were also present. To kickoff the presentation he showed a couple of slides as follows:

Wisenheirmer continued: “Please also note that the second slide states the galaxies remain the same size. Which is fortunate for us. Can any of you students tell me why?”

After a few seconds a student on the second row raised his hand.

Wisenheirmer asked him to stand and state his name.

The student, named Dan answered, “I read about this somewhere about a year ago. The observation was, if the individual galaxies expanded—like our Milky Way, then our Solar System would also expand. This would increase the distance between our planets. And furthermore, it would increase our distance from the Sun.” 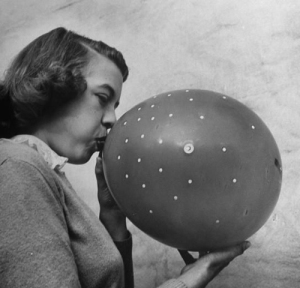 After some grins and mumbling from the attendees, Wisenheirmer interjected a creationist theory about the awesomeness of God. “What if we assume this girl in the slide is God, causing the Universe to expand by blowing into a balloon as such. Again, this is my presupposition, so bear with me. Then think about the mind-blowing massiveness of God. Well I maintain, He’s much, much bigger than that. It is far out, isn’t it? Excuse the pun.”

Some of the students just sat and stared with blank faces in wonderment. This was the objective Wisenheirmer wanted. He terminated by asking them to think and analyze for themselves, before dismissing them.

At that instant Professor Wisestien interrupted and asked the students to also contemplate the following: “The resulting images from Hubble offer the deepest ever view of the Universe. As Wisenheirmer already explained, the telescope captures redshifted infrared wavelengths from light of early galaxies. Because light takes so long to travel from these remote objects, astronomers are looking back in time, seeing these galaxies as they appeared 600 million years ago. If you accept the Big Bang theory, calculations reveal the Universe is now 13.7 billion years old. Now that should give you more food for thought. Now you may go.”

Some Of My Community